As discussed here, chiffchaffs can make more than one call - collybita birds have a standard 'hweet' but occasionally we get large numbers of birds making an alternate call that can be described as 'sweeoo'. The winter of 2016/17 was certainly one of those occasions.

Before go on to discuss the birds occurring this autumn and winter, I should direct people who are interested in these things to this paper in Caluta, which summarises the sweeoo situation very neatly, describes previous 'irruptions' into eastern Europe, and gives a nice account of the variety of sweeoo calls that can be encountered. It also very conveniently lays out the questions that still need to be answered!

So what of this autumn and winter then. I encountered sweeoo birds on several occasions...

I spent a week on Ouessant in mid October, and like a moron did not record a single note. However, I can clearly recall hearing a large proportion of sweeoo calling chiffchaffs - from memory well over 50% of the birds I heard calling were sweeoo - and as unscientific as this sounds, they all looked pretty standard to me.

I'm also lucky enough to spend a lot of time in SW France, a part of the world where wintering chiffchaffs are not particularly uncommon. This winter chiffchaffs were even more numerous than in previous winters, and I estimated that approximately 95% of the calls I heard coming from chiffchaffs were more consistent with 'sweeoo' than they were with hweet. Luckily I was more interested in recording them than I was on Ouessant (many fewer distracting rares...)

Xeno-canto also backs this up to some degree. Of 15 chiffchaff calls recorded in western Europe during this period, 11 are classifiable as sweeoo types. Without getting the calculator out, that's about 70%. The ratios for previous years are below (chiffs recorded in Dec or Jan, in western Europe)

What this shows is that the winter of 2016/17 has a particularly high proportion of recorded sweeoo callers in western Europe compared to other years. I did consider that there might be some bias here, insomuch as that people might be more likely to record birds they encounter giving these alternate calls - but of course if this is true for one year then it would be true for the rest.

And finally, other people have noticed them too - a few have been confused by them in Britain over the autumn, and I've also been sent recordings of birds from Mallorca, where again, the proportion of 'sweeoo' calling birds was said to be very high.

There appear to be at least 2 different motifs being used. One was particularly prominent, a call that was sometimes audibly trisyllabic. All show the same consistent differences from standard hweet calls. Calls like these have been recorded in both the UK and Mallorca this winter, and there are plenty in Xeno Canto, for example:

What do these calls look like then? They're all consistently different from a collybita hweet in having at least two (sometimes three) clear syllables, being higher pitched, and lacking the strong harmonic that a hweet has. 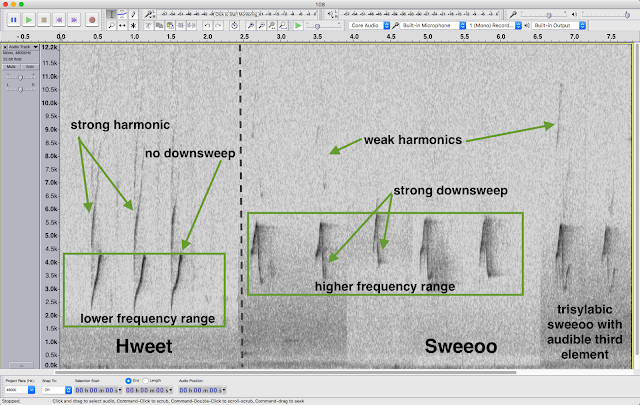 The second 'variant' sweeoo motif seems less common, which might be a result of it being less obvious. There are some obvious similarities between it and the hweet call, with its dominant upsweeping sound, and what appears on the sonogram to be a strong harmonic. 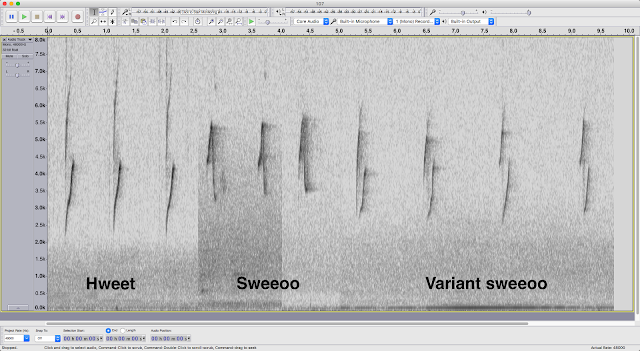 However, what looks initially like a strong harmonic is actually a separate, audible part of the call - so what you're hearing here is less sweeoo (steep upsweep followed immediately by steep downsweep) and more like swee-wee, with a steep upsweep followed immediately by another, lower pitched steep upsweep. In the sonogram below, you can see how one part of this call starts after the other has finished, rather than being a higher pitched (harmonic) version of the lowest part of the call (fundamental) as it is with a standard collybita hweet. 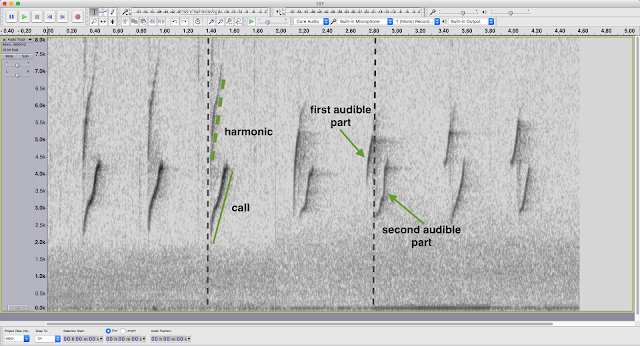 This call does sound different to the sweeoo described above, with the two notes sometimes clearly sounding like separate entities. A comparison between the three can be heard here (this is the track that is depicted further above with hweet, sweeoo, and variant sweeoo labelled - so the first three calls you here are hweet, the second three sweeoo, and the last 4 the variant sweeoo)

All that waffling on doesn't get us any closer to the answer of the big question though, does it? The big question is 'why do these birds sound like this'?

One thing that has occurred to me during it all is that the idea of delayed call development hits a bit of a snag when you consider that these calls have been heard throughout western Europe from at least mid October (my Ouessant birds) to at least mid January (a recording made on Mallorca kindly supplied by Jason Moss). Shouldn't they have crystallised into hweets over this period? Also, if you got that far in the Caluta paper you may have noted that the only genetic analysis performed on a sweeoo calling bird returned an abietinus. Could some combination of the two proposed answers to this question approach the real reason we get occasional influxes of sweeoo birds? Or does autumnal immersion in sweeoo calls lead to crystallisation of a sweeoo call rather than a hweet? I think the only way to really answer the big question is to trap a load of these birds and do some lab work - either stable isotopes or genetics. Maybe then I can stop writing about it!
Posted by Mark at 09:17

Email ThisBlogThis!Share to TwitterShare to FacebookShare to Pinterest
Labels: chiffchaff