Nocturnal bird recording - how I do it

If this appears familiar to anyone, it'll be because it is largely lifted from a thread on Birdforum that I started last year. With my first recording session of 2017 completed a couple of nights ago, it's time to get the ball rolling with getting some details onto here.

A few recording sessions in September last year revealed a few interesting results, such as greenshank and dunlin, goldcrest, and regular passage of terns (both Sandwich and common). I'm looking forward to seeing how numbers of night migrants and variety of species changes through the year.

My kit: I'm using a Roland R5 recorder attached to a Rode NTG2 directional microphone. I use Audacity to visually scan through a spectogram of my recording, to try and isolate calls. I didn't alter the settings from what I'd normally have it on for standard field use, which means it's probably set to a fairly high resolution, and I could probably reduce the size of my sound files by dropping that a bit. I can't remember what the settings are exactly, but you should definitely make sure you're recording in MP3 rather than WAV, as an MP3 file is going to be a lot smaller. Not sure what size the card is, but I can record at least 1.07 GB and not run out of space.
The only issue with file size for me is that it made Audacity a bit clunky when I had 1 GB open in it. When I've analysed the recording, I archive all of the identifiable stuff I get but I dont keep every recording so a nights recording of 1 GB will reduce down to just over 1 minute of useable stuff in the end.

While some people leave lovely parabolic reflectors set on tripods, pointing skyward over night, I have a slightly different set up. We have a shared garden and in this neighbourhood there is no way I am going to leave anything worth money accessible in the garden! Instead, I get an old handbag and place the mic in it, pointing upward. I hang this out of the window, trying to make sure the mic is pointing upward but away from the house a little (otherwise I'd just be getting crystal clear recordings of the gutter). I've bought a long cable so the recorder can easily be kept on the inside of the window while it is running. One advantage of this is that the mic probably gets a little more shelter from wind than if it was sitting in the middle of the garden.
My location:

I'm based on the outskirts of Aberdeen, next to the harbour - a surprisingly quiet place all things considered.  It's certainly a decent place for flyover birds in the day and I've had whimbrels, whoopers, pinkfeet etc going over during the night. I do record the odd bit of ambient noise, traffic, trains, drunk people singing etc, but not enough to hinder hearing more interesting things.

This is the time consuming but fun bit. Once the recording has opened in Audacity (this can take a while) I reduce the size of the file by splitting the stereo track into two mono tracks and deleting one of them. I then zoom in to the recording (magnifying glass button in the toolbar) so that the screen width covers about 5 minutes worth of time - the x axis of the spectogram. Be aware that with a big file, the zooming in will not respond immediately so you might have to wait ten seconds or so for Audacity to respond. And then I press play! Obviously I'm not going to sit there and listen to 7 hours worth of recording, so I skip through looking for obvious noises. You can click anywhere in the spectogram, and pressing play will start your recording playing at that point. If I have a window that is obviously blank, I just click at the far right of the screen and press play - a few seconds later the window will have scrolled onto a new part of the recording and I can start looking for obvious visual signals again. While the file is playing, you can also skip through both forward and back, using the cursor. All the while I'm listening to whats going on through headphones, so my other half can watch 'Eastenders' in peace...

I probably miss a few birds like this, especially early in the morning when the local robins start singing, and the sonogram is full of 'visual signals' that make finding night migrants a lot more difficult. However, I've found some good stuff using this method, including a huge surprise on my first session this year - A coot flying over at about 00:50! I've only seen two coots locally before so it was well worth all of the sifting! I'm sure there are plenty of other surprises in store too. 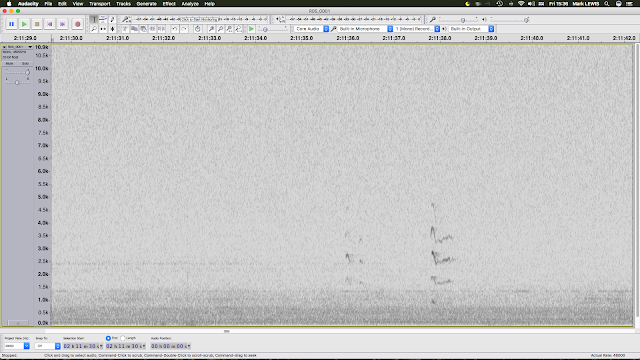 A coot over the house at night.