On 3rd January 2017, Ryan Irvine and I found a couple of chiffchaffs in Nigg Bay, Aberdeen. This has become a regular wintering site for chiffs over the last few years (possibly the only one in NE Scotland) and has hosted the odd Siberian chiffchaff too.

When we got the first few glimpses of the first bird, we assumed that we had stumbled into another 'tristis' bird, based on plumage features. Rather confusingly though, while we watched it, this bird called several times and consistently gave calls that to our ears sounded like a weak version of the standard collybita 'hweet'. At this point a proper Siberian chiffchaff call started up and we abandoned the original chiff to get views and recordings of the bona fide Sibe. The original bird is shown in the photos below. 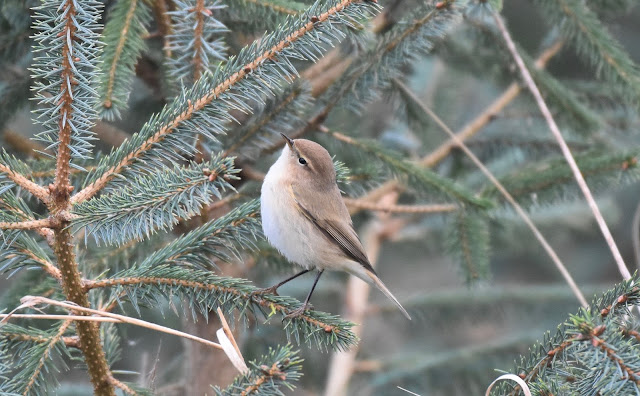 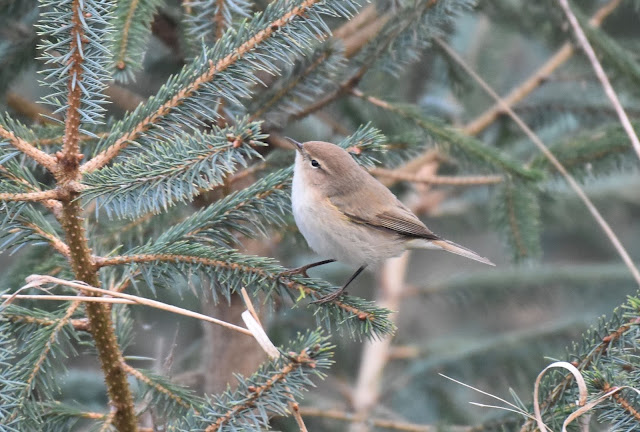 It wasn't until a week later that I decided to listen back through all of the recordings I made while trying to record the Sibe. I was surprised and quite pleased to find that I'd accidentally managed to record the original bird calling twice. Running it through Audacity, it quickly became clear that what sounded to our ears like a weak version of a standard 'hweet' bore very little resemblance to the sonogram of the standard call. Both call types are compared in the sonogram below. 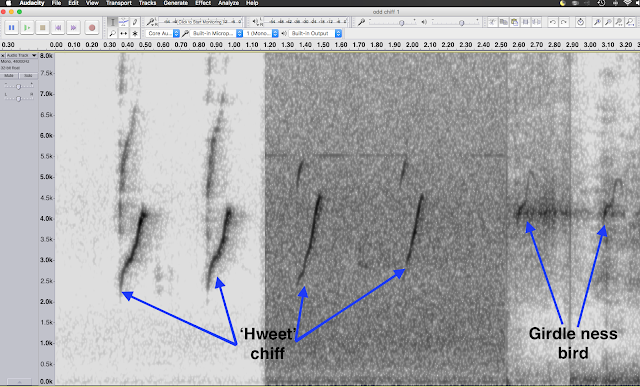 The two calls on the right are the bird in the photos above - totally different to a collybita 'hweet', and reassuringly similar to one another. I can't find any similar looking calls in Xeno-Canto (although I can't say I've checked all of the chiffchaff calls as there are hundreds...) and there's nothing similar looking (or transcribed) on Alan Deans website, so I'm none the wiser as to where this bird and its unusual call might be from. One possible explanation is that this is not the whole call - sometimes birds give truncated versions of their usual call (I've heard yellow-browed warblers do this, for example) - and perhaps we're hearing the first part of a 'sweeoo'. It was a dull day, and when I've heard YBW truncating their calls it's generally been cold, dull or early.

It's worth noting that the photos over emphasize the coldness and paleness of the bird very slightly - in the field, there was a touch more olive/green in the mantle, too much yellow in the underparts, and even signs of streaking on the chest. Many people have suggested that it could still be tristis - with the calls being within known variations for this taxa. Particularly, it has been suggested that the calls of this bird look very similar to a variation in the Sound Approaches brilliant 'Catching the Bug'.

While the shapes of this birds calls look very similar to those on page 164 of CtB, there are a few differences that are worth noting. The horrendous sonogram below compares the CtB variants with the bird above, and shows that these variant tristis calls cover a much wider frequency range, and are stronger at the top end of the frequency range rather than the bottom. 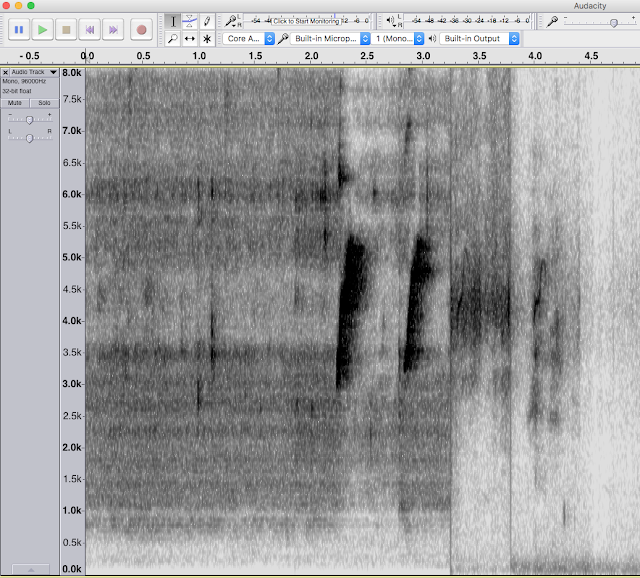 However, I guess if Siberian chiffchaffs can make one variant call then they're capable of making a few, and could easily do something similar to the calls above. The thing that could dissuade me from considering this to be a variant call was that we heard this bird doing this call upwards of ten times, and each call sounded like this (rather than throwing in variations here and there among more normal calls). In other visits to the site this winter I've only ever heard tristis calls (although the birds are largely silent, infuriatingly!) rather than a mixture of 'peeping' and 'hweeting' birds.

Whatever it is it's an interesting one, and I'd love to get a few more recordings of it!