Comparison of some chiffchaff calls

Chiffchaffs. Where do you start?

Well, very often, you start with the call, as it's frequently the first hint you get that there is a chiffchaff nearby.

We're used to chiffchaffs saying 'huit' in the UK, and when we're lucky, we get to hear Siberian chiffchaffs making their 'peep' calls (other phonetic renderings are available - such as 'eehp'). To complicate things, we sometimes encounter chiffchaffs that say what can loosely be described as 'sweeoo', and it's a bit of a mystery where these birds or their calls are coming from. For a while, they were ascribed to the various subspecies, with collybita saying 'huit' and the now near-mythical abietinus responsible for 'sweeoo'. We now understand this not to be the case, so there are two positions to start from.

a) these birds are from a distinct population.

b) these birds are the offspring of late breeders, so we hear juvenile, or less crystalised calls at a time when we're not expecting it.

I don't know what the answer is - but what makes the whole thing more interesting is that the 'sweeoo' calls are highly variable, and that the birds that make them seem to be 'irruptive'. I don't necessarily want that to mean the same as it would mean with, for example, waxwings - it's just a way of describing that they can be very numerous in some years, and very uncommon indeed in others. 2016 was definitely a 'sweeoo' year.

Before we get too deep into the nitty gritty of sweeoos, huits, and peeps, lets just have a look at the structures of the different calls. Lining the recordings up on top of one another allows a rough comparison, but putting the calls side by side (and zooming in a bit more, as this will allow) gives a much better opportunity to look at the differences between all of the calls. 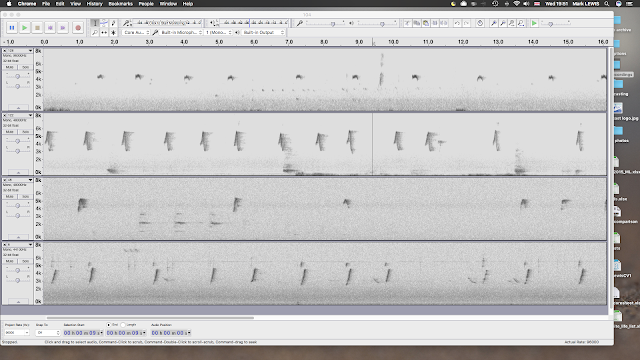 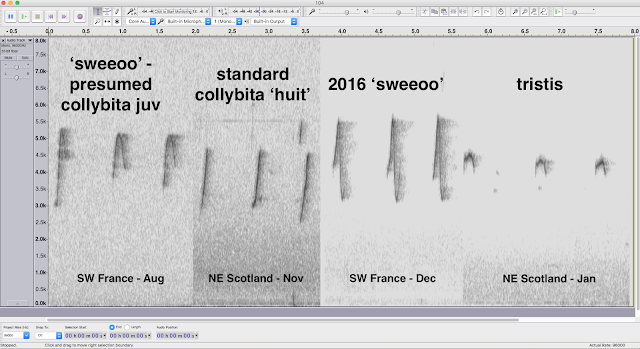 The composite is easy to make. I opened a new track in Audacity (tracks menu -> add new -> mono track), and then simply copied (highlight relevent section -> edit menu -> copy) and pasted (click in new track -> edit menu -> paste) into the new track. These ones have had some of the time between calls cut out (scissors tool) so they all fit nicely onto the same page. The real beauty of this is that it lines everything up at the same time/frequency ratio, which allows you to make a valid comparison of frequencies and shapes of motifs. The rapidly upward rising 'huit' is obviously different from the flat topped call of the tristis type bird. The two 'sweeoo' calls are different too. The presumed collybita juv has two parts to the call, the upward inflection at the beginning followed by the downsweep. The winter 2016 birds sounded very different, with some calls showing a clear third component to the call, ending on a smaller, shorter upsweep. This could be heard in the field on occasion, with some calls sounding clearly tri-syllabic.

Lining them up together also allows a comparison of the frequencies the birds call at, such as the sonogram below. 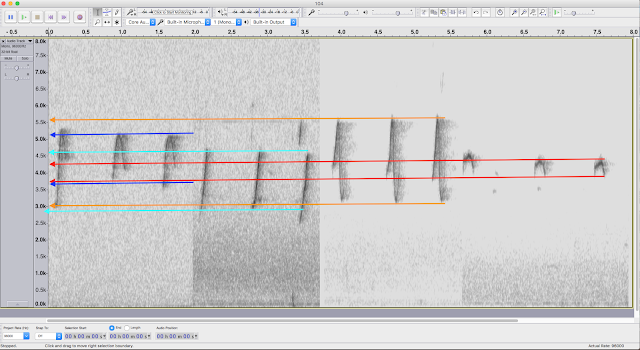 Here it's clear to see how the tristis type call utilises a much narrower range of frequencies than all of the others - which explains why the call is uncomplicated, and sounds flat. I always took this familiar tristis description to mean flat as in the musical sense - but now when I hear it, I 'hear' a flat motif on a sonogram - or at least a 'flattened' one.

It's also clear that the 2016 'sweeoo' birds reach some really high frequencies. They sound high in the field, but here it can be seen that they reach over 5.5 khz, over 1 khz higher than their 'huit' calling cousins.

None of this helps with the conundrum of where the variable 'sweeoo' calls come from of course. But the more we recognise them in the field, or even get good, useable recordings of them, the better equipped we will be to come up with a reasonable answer.