There are plenty of options for birders who want to analyse and edit sound recordings, and produce sonograms depicting what they’ve heard. A decent selection can be found here and if anyone feels like experimenting we’d love to hear about what you’ve used and whether it was any good. There are two that seem to be favourites among birders, and these are Audacity and Raven. Both are free, safe to download, and are easy enough to pick up.

Audacity can be downloaded from here: http://www.audacityteam.org/  and the installation process is fairly simple - I managed it and I’m not particularly techy at all. On my mac it was a simple drag and drop followed by opening the app in my applications folder. For mac at least there are very useful instructions on the Audacity download page, and there’s no reason to expect them not to be there for Windows, Linux, or any other operating system.

Once Audacity is installed, open it up. You’ll be met with a blank grey screen with a few tool bars and menu lists at the top. It looks like a lot to take in but hopefully we’ll cover the most useful aspects of using it here, and by the time you’ve played around with it a few times, you’ll probably be confident enough to experiment yourself.

Before we get started with that though, a few boring words on file types. Your recording device will probably record sound into either .WAV or .MP3 files, or possibly something else if you've used a mobile phone (iPhones create .m4a files for example, which Audacity handles very nicely). WAV files contain the most detail but as a consequence are much bigger then MP3 - so if you want to store lots of files, email or upload your sounds anywhere, MP3 is the best bet (the lower quality is pretty much undetectable). Keep in mind that Xeno-Canto will not accept .WAV files, only MP3. So, in short, set your recorder to record MP3 files. However, Audacity cannot create MP3s directly, but it does so very effectively with the help of a plug-in called LAME. All this to say that if you want to edit your sounds and save the edited versions as MP3s then you’ll need to install this plug-in. Please don't be put off by that - it’s all very simple and Audacity will prompt you when the time comes.

So, back to the blank grey screen. You’ve been out and recorded what you think may well have been a Siberian chiffchaff but you want to check the sonogram. Transfer your recording to your computer and save it with an appropriate name, in a place you’ll remember how to browse to. Go to the FILE dropdown menu in Audacity and choose either OPEN or IMPORT. Browse to your sound file and open - all of a sudden (unless it’s a massive file) your recording should appear in sonogram form, replacing at least some of that blank grey screen. Note - if your file does not appear in sonogram form (it might default to waveform until you tell it not to) open the dropdown highlighted in the second image and select 'spectogram'. You can play your file by hitting the green triangle button in the top left corner, stop it with the yellow square next to that, and zoom in and out of the sonogram using the magnifying glass buttons towards the right hand end of the toolbar. You can also change the shape of the window by clicking on the yellow border around the sonogram and dragging. 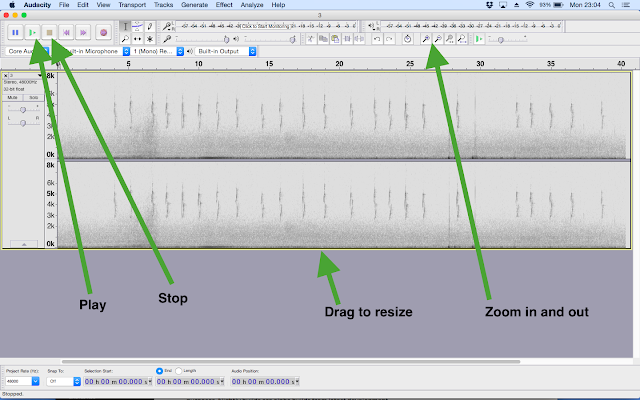 If you are recording in stereo you’ll note that your recording appears twice. If you want to make a nice sonogram it’s useful to get rid of one of the tracks, so click on the little black arrow that appear below the play and stop buttons. This opens up a dropdown menu, with an option to Split Stereo to Mono. Choose this option and then get rid of one of the tracks by clicking on the tiny ‘X’ in the top left corner. Once this is done you’ll be left with a single track sonogram that you can zoom in and out of, play, stop, etc. If you wanted to email it to someone or insert it into a description, you can either take a screen grab, or go to the HELP dropdown menu in Audacity, and use one of the screenshot tools. 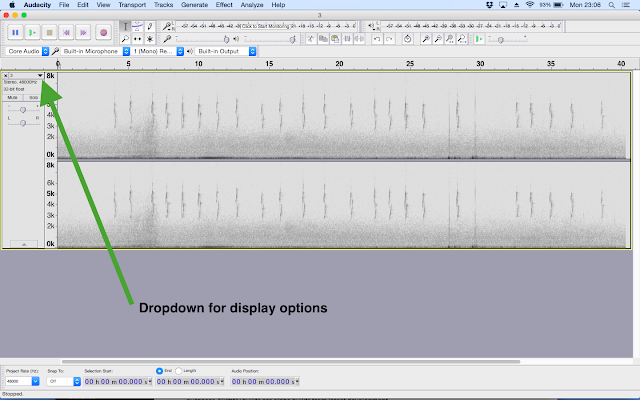 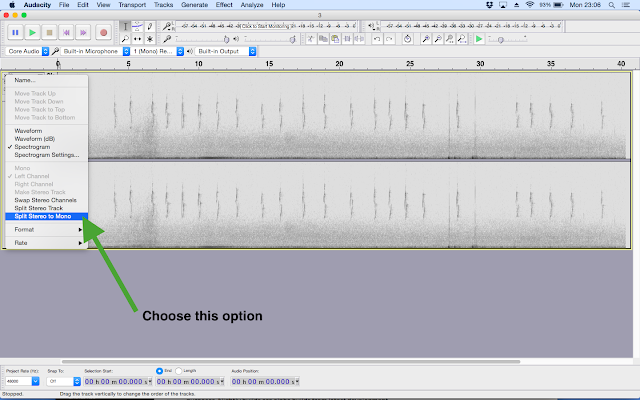 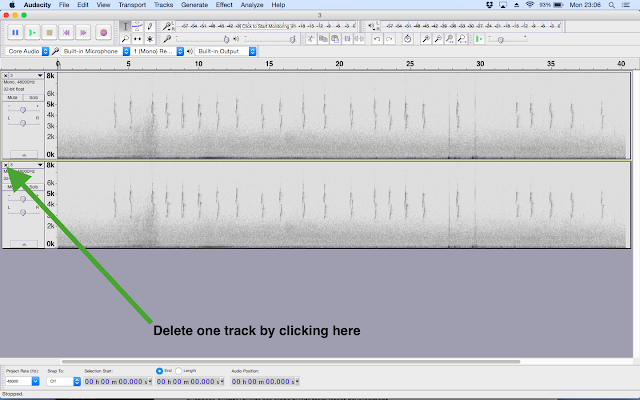 Your first sonogram, ready to edit or use, looks like this! And unfortunately it's not the hope for Sibe but one of those mysterious 'sweeoo' chiffchaffs. Much more interesting... 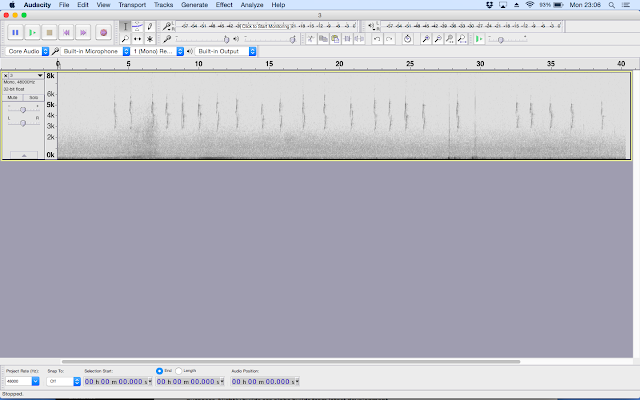