When I was a much younger person, corn buntings used to sing in the farmland that was a short walk from the end of my road, and it was a song that I remember being familiar with right back to the very earliest days of my time in birding. A lot has changed since then of course. I've moved away from the pretty, rural edge of Durham city, and of course corn buntings have moved away from pretty much everywhere. Consequently, despite North East Scotland remaining a stronghold for the species, it's a bird I hear very occasionally at best.

In November 2016 I was visiting friends near Auchnagat, in North East Scotland. After a heavy night for most, I got up at dawn and headed out, with the hope of finding and recording some tree sparrows. I hadn't bargained on stumbling into singing corn buntings - I had no idea that they sang in November (despite my earlier claims of familiarity) but here they were, several birds, perched up on fenceposts and singing as boldly as they would in spring.

Here's a recording of one of the singing birds.

And a sonogram of the song from the same recording. 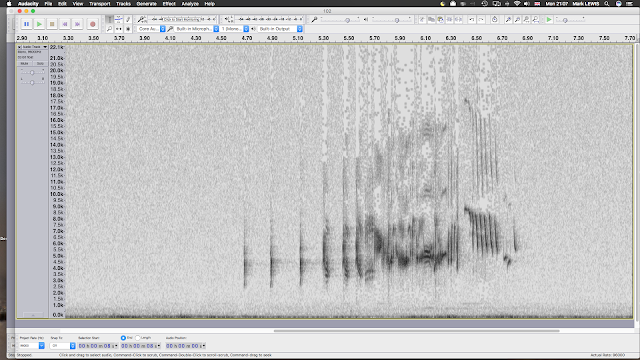 Having done a little research, I've found that singing in November is not particularly unusual in corn buntings at all - which highlights how little I know about this once common bird. Another thing I couldn't say I was overly familiar with are other corn bunting vocalisations. I don't remember them from my younger years, a time when bird sounds were essentially none existent unless my dad had pointed them out to me. I've heard the distinctive calls of small groups of birds in flight on South Uist, but I encounter them so infrequently, I suspect that I wouldn't have felt too confident about nailing one in flight if I were 'out of range', especially if I were only to hear it call once or twice.

This encounter provided a perfect opportunity to listen to the calls of these birds and cement them in my minds ear. The recording below is a bird that was calling while sat up on a fencepost, and it doesn't sound noticably different to the noises that other birds were making as they flew around with a small flock of linnets. That said, this bird had just been singing and stopped as it became aware of my presence, so despite the fact that I wasn't particularly close to this bird, these calls could feasibly be alarm calls.

The calls can be heard here.

The corn bunting calls are the short, high pitched and slightly raspy sounds. 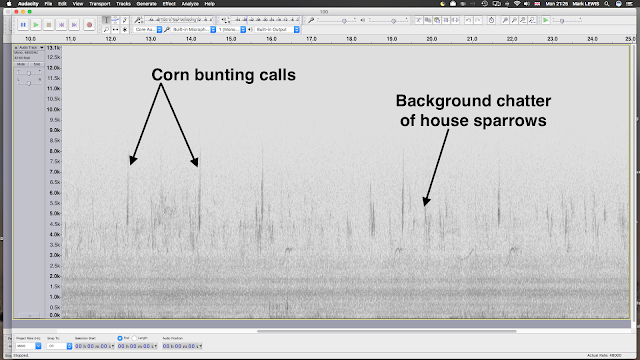 While they superficially look like quite simple calls, zooming in shows how they are composed of two distinct notes, an initial one that covers a narrow range of lower frequencies, (very) quickly followed by a second note that covers a wider frequency band, reaching up to about 8 khz. This structure can be seen in the sonogram below (I've cut out much of the sound between each call). Were talking about a gap of about 1/100th of a second between these notes, so it's no wonder that this is not clearly discernable by ear! Having heard these birds so well, and listened to the recordings, I'd now be much happier doing one solely on call if one was ever to fly over girdle ness. I'd be even happier if I got a recording that let me see this rather distinctive call structure! 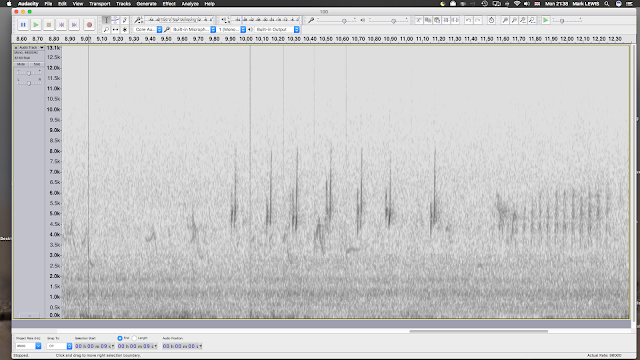 While tonally, these calls sound like those that lead into the typical 'jangling keys' song, the sonogram shows a few differences (with this bird, at least!). These lead in notes are slightly lower pitched, and although appearing to have a two note structure, it's less audible (essentially due to an even smaller period between the two notes) and each note appears to cover the same range of frequencies. The lead in notes appear on the left of the sonogram below - note how the time scale in these last two sonograms differs, with the one below being even more 'zoomed in' than the one above, meaning that the horizontal axis in the one below covers a much smaller period of time. 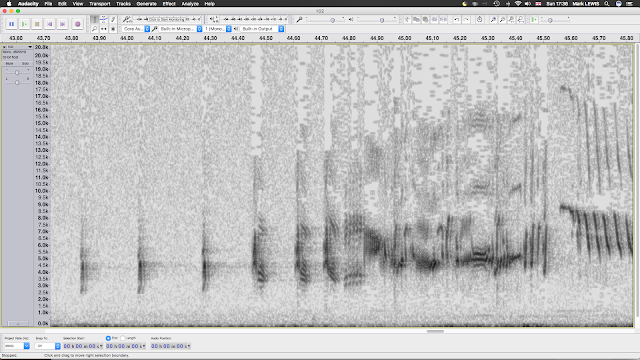