The nocturnal 'dripping tap' call of the spotted crake is well known but no less exciting for it, and evokes images of wild, remote fenlands. Last year on my travels, I was lucky enough to spend time at a site where a pair of spotted crakes were present, and as well as being treated the rather bizarre spectacle of the pair chasing each other in flight over the marsh, I got to hear some variety in their vocalisations that I hadn't previously been aware of.

There are a few assumptions that I certainly had made about spotted crakes, mainly that they only vocalised at night, and that it was only the males that vocalised. I've found that both of these, while broadly reflecting reality, are not strictly true. 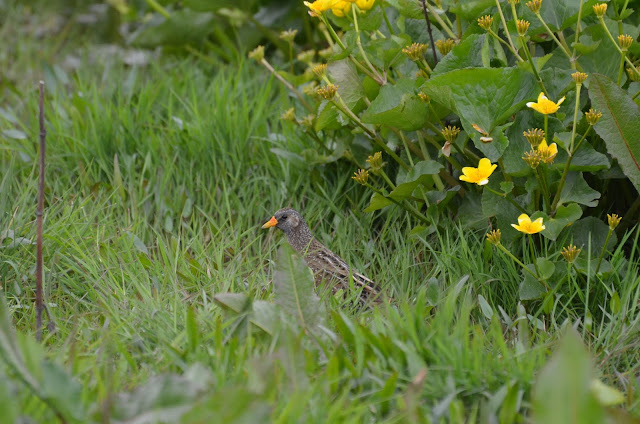 While unfortunately I don't have any recordings to verify this, both birds were heard to 'sing' at the same time at least once, and there were numerous occasions when the locations of calls from within the site hinted very strongly towards two birds vocalising, albeit not simultaneously. The idea that both males and females can vocalise is not particularly new, but I suspect that when confronted by a singing crake, most would assume that the bird was a male. RBBP records of this species are almost exclusively attributed to 'singing males' - can this really be stated confidently? Perhaps females only vocalise when paired up? Or perhaps all those recording 'singing males' have eliminated the apparently slightly softer vocalisations of females? Whatever is going on, at sites where more than one territory is suspected, there is potential for confusion caused by singing female birds.

One thing I really wasn't expecting was to hear the birds during the day, but in fact it wasn't particularly unusual at all. I never heard full song during the daytime (this was mostly heard in the dead of night, or around dawn and dusk), but I did hear several variations on that theme in broad daylight. These can be broken down into three broad categories, as defined below. Another aspect of these vocalisations that really surprised me was that they were not always given from within the depths of the abundant cover - birds quite frequently vocalised in the open on the edge of banks of sedge or marigold,  in full view. This gave the opportunity to watch the physical effort the birds made with each sound, standing steady and compact, heads jerking downwards with each note. In fact, the birds were surprisingly confiding during the day, and allowed themselves to be filmed through a scope (under agreement from the relevant authorities of course) if you waited quietly enough.


The three categories of daytime vocalisation are:

This was usually heard before dusk, and could feasibly just be birds warming up, or genuinely being hesitant about advertising their position while it would still be light enough for them to worry about diurnal predators. Hesitant song basically sounds just like the standard song, but is delivered for short bursts.

Here, the bird threatens to get going a few times but without ever really managing it. Note how it never really finds it's rhythm too, with the pauses between notes being slightly extended from time to time. In this recording it's also clear that the singing bird doesn't enter immediately into full song, but starts off gently and ramps things up over the course of a few notes. This recording was made at around 10 pm, so late, but still fully light. The sonogram below is taken from this recording, showing the portion between 1:13 and 1:27. The 'ramping up' is visible here, with the notes noticeably reaching higher frequencies and getting louder (= darker on the sonogram) as the song progresses. 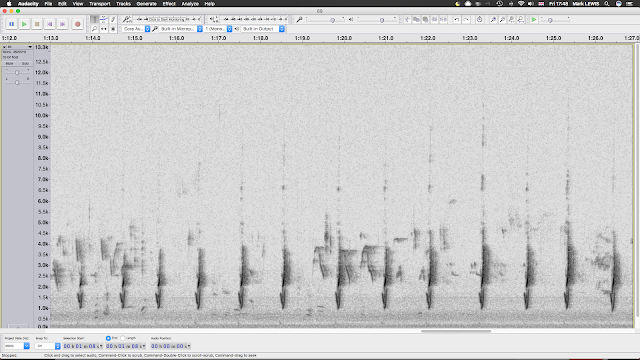 The most frequently heard daytime vocalisation away from early mornings or late afternoons was of single or double song notes, uttered quite loud, but without ever developing into song. Perhaps these calls are used as contact calls or alarm calls? Perhaps it's exactly the same as hesitant song but with the birds being even more cautious due to the time?

Occasionally, during the day, birds would enter into what I have called subdued song. Here, a reasonable succession of notes are delivered, but the individual notes are given much more quietly, and never quite hit the same frequencies, or have the same quality as the full night time song. Note that the subdued song below was made from the same location as the other recordings, and the bird was at a similar distance (it must have been, as it was a very small site!). Perhaps this was the female bird singing? Whatever the reasons, you can barely hear it over the song of the skylark the my mic was pointing nowhere near, and was much further away than the crake

I'd love to know more about these differences, and whether they're sex related, or merely products of the urge to sing, compromised by the desire not to be eaten! It must be one of the least known British breeding birds, and the opportunity to spend time in their presence was a real privilege. While they are without doubt annual breeders in the UK and probably in underestimated numbers, there are only 7 previous verified breeding attempts, apparently!  Mega!