Sometimes Hume's warblers can be relatively easy to identify, but there are plenty of them that look pretty similar to good old fashioned yellow-browed warblers. Usually the really tricky ones can be done on plumage given good, prolonged views, but in the end with these birds, it's usually the call that finally nails the ID one way or the other, as with this bird described by Martin Garner, and this bird on Scilly, which to my eye looks very similar to a bog standard yellow-browed.

Much is made of the variation in the calls of Hume's warblers and the reliability of yellow-brows to say 'tsooweet', and I think that as a general rule, that's totally fine, However, when confronted with a tricky striped phyllosc in late autumn, it's worth remembering that not everything is set in stone. Yellow-brows frequently drop a syllable here and there among sequences of their standard calls, but how often do they give sustained bouts of consistent variant calls?

One morning in mid November 2014, Will Miles and I were birding the Nigg bay sewage works, enjoying a late fall of goldcrests and the odd chiffchaff. Andrew Whitehouse had reported a yellow-browed warbler at the site a few days previously, and it didn't take too long sifting through the crests to pick this bird up. While watching it, we were shocked to hear it give what consistently sounded like thin, high pitched monosyllabic calls. We agreed that these sounded much more like Hume's, and were audibly a decent match to a Hume's call I had on my phone. I managed to get some recordings of these while watching a bird that I considered to look like a yellow-browed warbler, with the understanding that I definitely hadn't seen it well enough to rule out something like the Scilly Hume's example above. We cautiously put the news out that the Nigg Bay YBW might be a Hume's, and sent the recording off to the Sound Approach, who also cautiously suggested that the bird might be more likely to be a Hume's warbler too.

I went back to the site at lunchtime, by now fine, sunny and warm, and picked up the same flock of crests at just about exactly the same spot. Almost instantaneously, a classic YBW call started to ring out from the flock. I was pretty sure that it was the same bird. The chances that a crest flock would host a single YBW, then a single anomolous bird, and then a single YBW again were much too slim for me, and also, based on what I'd seen, I was happy that the bird looked much better for a YBW. 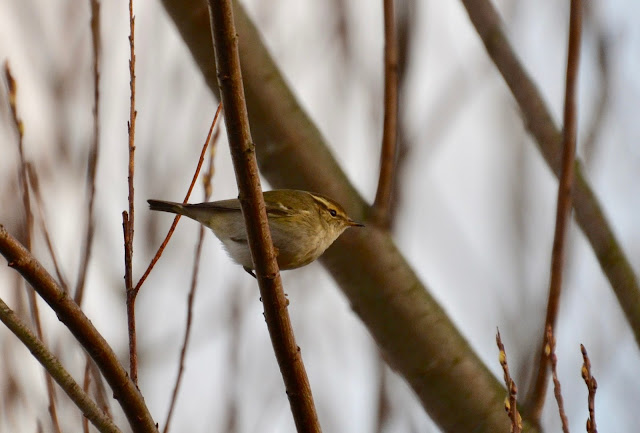 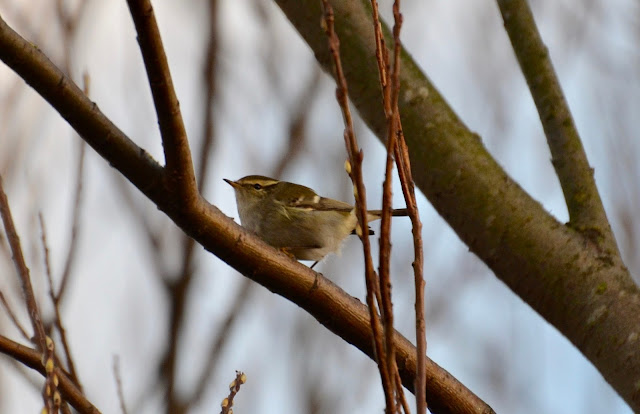 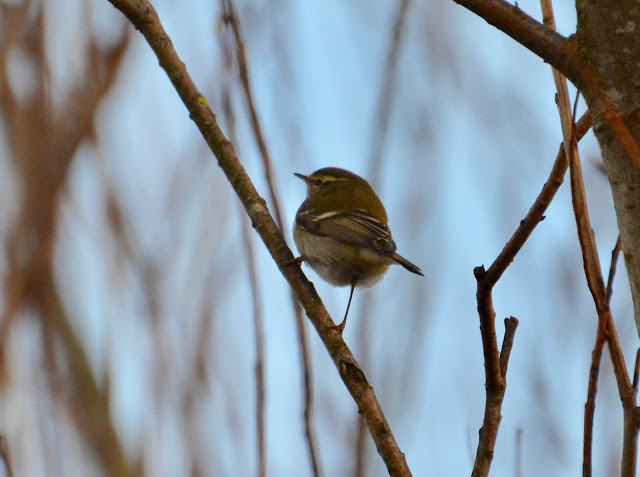 Many features consistent with YBW can be seen in the photos above, including:

plenty of yellow in the supercilium
well marked dark eyestripe, particularly in front of the eye
mottled ear-coverts
no real paleness or greyish cast to the upperpart tone
dark centred greater coverts
dark bar at the base of the secondaries contrasting with strong, white greater covert bar
dark tertials with neat, narrow white fringes
The legs and feet especially were pretty pale

Along with the appearance of the bird, the calls heard at lunchtime confirmed (to me at least!) that this was a YBW. The sonogram below shows this birds calls alongside a YBW recorded on Sanday (Orkney) in September 2015. Despite the Sanday bird having a slightly wider frequency range, the calls are clearly very similar, 'V' shapes with the bottom halves 'pinched in'.

So what about the calls that fooled us so much first thing the same morning?

Well, I guess the first lesson is that a sonogram can tell you much more about a call than your ears can! Will and I were both convinced that the call we'd heard repeatedly that morning was monosyllabic, but the sonogram tells a different story, showing a very short, quick call with a similar 'V' shape to a YBW

In comparison with other calls though, these morning calls are consistently different. They only cover roughly half the frequency range of the standard YBW calls (the higher half), lack the 'pinched in' look, and they are shorter in their duration, lasting for approximately 0.2 seconds rather than the 0.3 seconds of the standard call.

The two bird theory has been suggested several times in this instance, and while it would make sense, I'm convinced there was only one stripy phyllosc present. So - was this a Hume's and we dropped the ball, or was it a weird variant YBW call?
Posted by Mark at 09:37